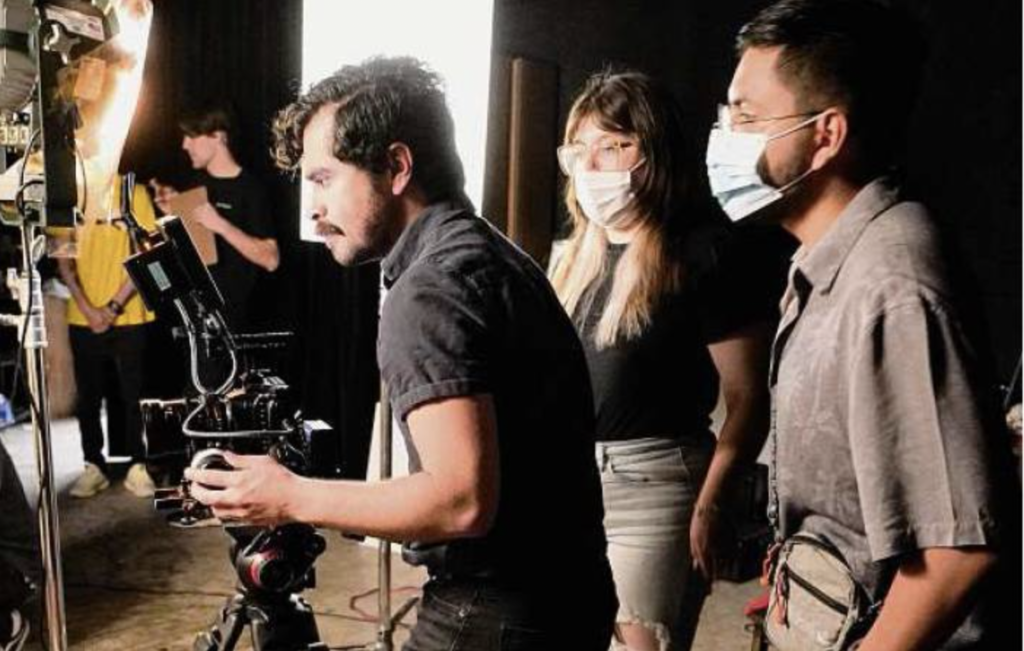 GAP-Net sites Baylor College of Medicine Alzheimer’s Disease and Memory Disorders Center and the Lou Ruvo Center for Brain Health at the Cleveland Clinic in Las Vegas are collaborating on a film project to bring awareness of the prevalence of Alzheimer’s disease in the Latino community.

Assistant director Aaron Thomas slams the clapperboard Saturday to set a crew of 20 people into motion as actors start their scene in a doctor’s office.

Armando brought in his father, Don Leonel, an elderly man who “stands attempting to show every ounce of youth in his spirit,” the script says. The crown of his vaquero hat leans down in front of the physician. He is hesitant to accept the Alzheimer’s.

“Alzheimer’s is nothing to be ashamed of,” said Dr. Ramirez, encouraging Don Leonel. “It affects 1 out of 10 people in this country. You did the right thing coming to us early.”

A few cuts later, the crew films the same scene in Spanish in one of the two studios of the Valenti School of Communication at the University of Houston, where an ambitious bilingual community health project to tackle the impact of Alzheimer’s among Hispanics is transforming the school into a little Hollywood.

The project includes production of five mini telenovelas that Valenti students have been working on for months.

The filming began April 9 and will continue every weekend this month for the first three telenovelas that won at a creative script writing “hackathon” in November.

The project is led by professor Luis Medina, a clinical psychologist, cultural neuropsychologist and director of the university’s Collaborative on Aging Research and Multicultural Assessment. He received a $2.35 million grant last year from the National Institute on Aging to increase health literacy and cultural taboo among Hispanics about brain health.

Medina said that Alzheimer’s is a disease that Latinos are 50 percent more likely to develop than non-Hispanic people. They tend to live longer and develop symptoms earlier but are diagnosed at later stages and are less likely to be treated. The lack of knowledge or acceptance of this mental condition impacts the whole family in characteristically frequent multigenerational Hispanic households where grandparents, often with limited English proficiency, coexist with younger generations raised in the U.S.

“There is still a lot of stigma about this disease in the Hispanic community and people struggle to talk about brain health and what we can do to make our brains healthier by identifying these things earlier,” said Medina.

Although Alzheimer’s is an incurable disease, “Dr. Ramirez” gave “Don Leonel” some recommendations to improve his overall health that can delay the progression of the illness, such as adding a quick 30-minutes-walk to the daily routine, getting enough sleep, or eating food richer in nutrients, among others.

Medina said that increasing literacy about Alzheimer’s would also help in breaching the Hispanic participation gap in clinical trials. They represent only 1 percent of participants overall in U.S. studies.

“We’re trying to understand the different nuances of the brain, but the lack of diversity in the research ends up limiting any progress we make towards understanding the disease,” said Medina. He said that just as a study, say, among people between 30 to 50 years old doesn’t provide enough inside to treat all people, clinical samples that do not comprise a diverse population are also limited.

Medina designed a community integration model with the plan of replicating it in other cities.

The integration started with consultations with community organizations to get advice about the best ways to reach out and get the message across Hispanic communities. They got many recommendations, from preferred words to address mental conditions, to telenovelas as the best format and the need for bilingual messaging.

“Everything for this project has a community aspect,” said Jennifer Vardeman, director of the UH Valenti School of Communication. “We are bringing together health communication concepts along with media production with skills that students have learned, and then moving into edited and fully produced videos that our strategic communication students promote in different ways.”

Most of the students involved in production belong to Hispanic families.

“Be it director and assistants, cameras, lighting, sound, makeup, wardrobe… we have everything covered with talented students, and they are pretty serious about their work,” said Dylan Medina, a recently graduated who is playing the communications and liaison role.

There were two sets ready for filming Saturday, the doctor’s office and a living room for a scene with a Hispanic family where colorful woven fabric covered the furniture. Both were designed by Laur Hale, majoring in media production.

“I wanted to make the house look very cozy with a Hispanic influence, so I put blankets everywhere, like maybe the Abuela knits, and little pots everywhere,” Hale said. She added that she is loving that the school is providing students with real-life production experiences.

“We are doing things that the actual industry does… this is filming for real projects like in the film industry,” Hale said, noting that this experience is giving her skills and curriculum ahead of beginning her working career.

Members of the crew said the Valenti school is offering an experience hard to get in Houston.

Lucio Vasquez, a media production student who served as director of photography Saturday, said the school is providing “an incredible opportunity for people who are trying to come up in the industry, because the film industry here is, in all honesty, lacking compared to other cities.” He said that Houston has incredibly talented people but a lot end up leaving for Los Angeles or New York.

Vardeman, who has been a professor at Valenti for more than a decade, said this production is larger in scope and students participation than previous filming projects. She hopes to elevate the profile of the school as a studio production center, where students get hands-on experience doing projects with other schools and Houston institutions.

“A bigger picture for the school is that several entities within Houston are trying to really attract and retain filmmakers and production personnel, and we definitely have the expertise and skillful students,” she said.

In an era when diversity is pursued but still lacking in the film and media industries, Vardeman said she likes to consider the Valenti school as a “little Hollywood in one of the most diverse universities in the country.”

The University of Houston is ranked among the top 10 most diverse universities in the country by the U.S. News and World Report.

Later in the year, after the telenovelas are ready for the public, the marketing and public relations students will have a turn implementing strategies to disseminate the message.

Medina said that the mini telenovelas will be largely disseminated via social media.

“There is still a lot of stigma about this disease in the Hispanic community and people struggle to talk about brain health and what we can do to make our brains healthier by identifying these things earlier.”
Luis Medina, a clinical psychologist, cultural neuropsychologist and director of UH’s Collaborative on Aging Research and Multicultural Assessment.

Originally posted by the Houston Chronicle on April 18, 2022.