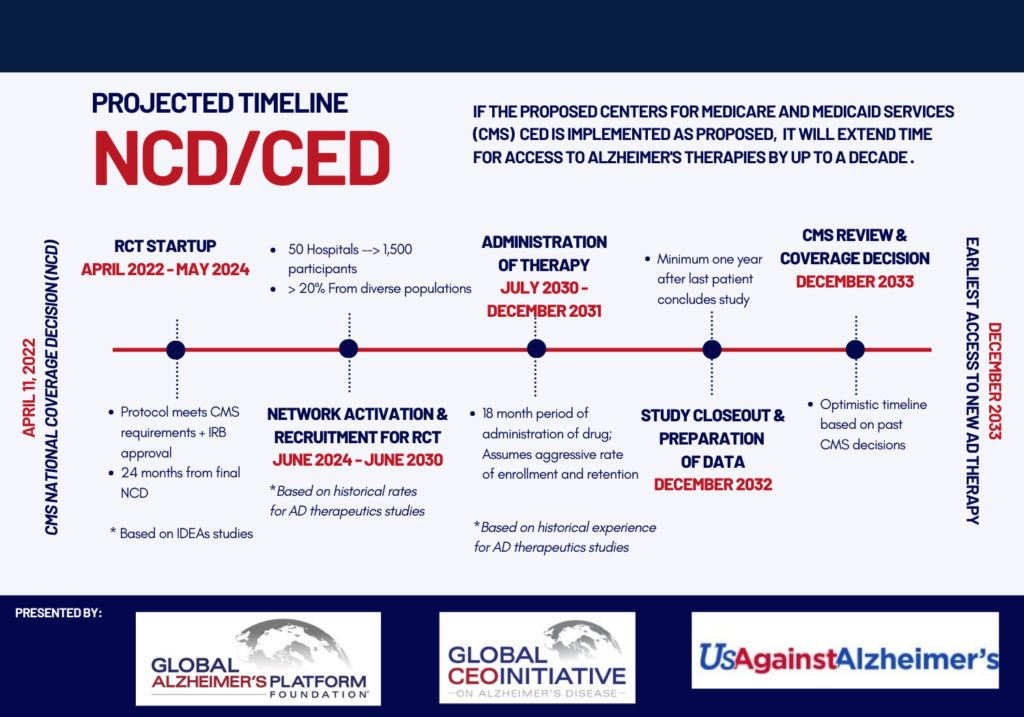 New survey finds that 83% of neurologists believe that the safety and efficacy of an entire class of drugs should not be determined by the results of one medication.

Washington, D.C. (February 2, 2022) – John Dwyer, President of the Global Alzheimer’s Platform Foundation® (GAP), a person-centric non-profit organization committed to accelerating the discovery of therapies for the treatment of Alzheimer’s, issued the following statement on a new survey of practicing neurologists, the majority of whom care for at least 11 Alzheimer’s patients per week. The survey shows that 83 percent of neurologists believe that results of one medication should not be used to determine the safety and efficacy of an entire class of drugs. The confidential online survey was conducted January 26-31 by GAP and UsAgainstAlzheimer’s (UsA2). Participants included 209 licensed neurologists in the U.S. with at least one year of clinical experience.

“We conducted the survey in response to the CMS draft proposal for coverage of an entire class of Alzheimer’s drugs which is stunning in the way it ignores the decision made by the U.S. Food and Drug Administration (FDA), its own past practices, and patients living with the disease. CMS did something it has never done before and effectively denied coverage to a class of FDA-approved drugs targeting a progressive, fatal disease.  We think CMS should follow the FDA’s decision as it has in the past and allow patients, in consultation with their doctors, to decide if this class of drug works—let patients choose. To open CMS’ frame of reference, we contacted experts who treat patients day in and day out.

“Neurologists who interact with and care for 11 or more Alzheimer’s patients on a weekly basis are voicing concern over basing a sweeping Centers for Medicare and Medicaid Services (CMS) coverage determination on the efficacy of one drug. Treatments targeting amyloid-plaques in the brain, known as anti-amyloid monoclonal antibodies, which will soon be coming up for approval are very likely to be even more safe and effective than Aduhelm’s early data based on the data they showed in a key scientific conference last November.

“When the doctors who care for those facing the devastating effects of Alzheimer’s are speaking out about the dangers of making too broad a coverage decision for a groundbreaking class of drugs, decision makers must listen. More and more stakeholders are beginning to understand the disastrous effects of CMS’ proposed Coverage with Evidence Development (CED) for Aduhelm, an FDA approved drug, and a group of additional drugs we can expect to be approved as early as this year. CMS’ proposal, if adopted as drafted, would create a nuclear winter for Alzheimer’s innovation – innovation that is so desperately needed in the fight against this disease which has not had a new treatment in over 20 years.

“If the proposed CMS CED is implemented as proposed, it will extend time for access to Alzheimer’s therapies by over a decade, with the earliest access to a new Alzheimer’s therapy delayed until at least 2033. With Alzheimer’s cases expected to rise to over 150 million by 2050, patients need to receive treatments in the early stages of the disease.  Every day 1,000 people will progress to a point in the disease where they may not benefit from this class of therapies.  A 10-year wait means more than 3 million patients will be denied treatment.

“13 percent of Black and Hispanic Americans over the age of 65 are thought to have Alzheimer’s or related dementias. These communities are two-to-three times and one-and-one-half times more likely to develop the disease, respectively. Without access to the only currently approved disease-modifying treatment for Alzheimer’s and to promising treatments currently in the pipeline, Alzheimer’s prevalence amongst Black and Hispanic Americans will increase, reaching 6 million individuals by 2060.

“CMS must listen to physicians and patients and change their draft coverage decision for the entire class of anti-monoclonal antibodies. All patients should have the right to choose whether these FDA approved drugs could work for them, particularly those in the African American and Latino communities that are most at risk for developing the disease, no one has time to wait.”