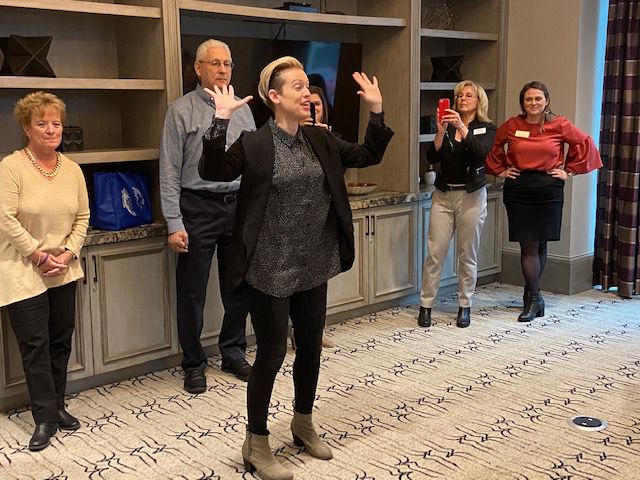 In February, Stomping Ground Comedy Theater lead a workshop for caregivers about how to best interact with loved ones living with Alzheimer’s disease or dementia. They also attended our 2020 GAP-Net Site Optimization Conference at the end of February.

About 20 strangers in a seminar at the Preston of the Park Cities assisted living facility are instructed to walk around the room greeting each other in the manner of harried executives.

They stride quickly and purposefully, issuing brusque acknowledgments of “hi” and “hello” in passing.

They then replay the experiment, but this time they’re asked to behave like close friends connecting after a long absence. People hug one another, gushing with glee.ADVERTISING

The difference, they agree afterward, is profound. People say they felt marginalized by the rushed greetings and nurtured by the warm welcomes, which occurred before social distancing became the rule.

Improv comedy training has been advancing over the past decade as a technique to help caregivers communicate more effectively with their wards. “We teach caregivers how to be creative and silly and go with the flow,” says Stomping Ground co-founder Lindsay Goldapp, who led the class with co-founder and psychotherapist Andrea Baum.

“It’s an experiential learning model,” Goldapp says. “It’s one thing to read a pamphlet and another to see it and feel it.”

“Everything they said was so right on about mirroring and joining them in their reality, and it was so fun,” said Katherine Reyna, who trains caregivers and attended the session.

A key technique is based on the familiar comedy device in which performers build on one another’s stories, saying, “Yes, and …”ADVERTISING

Caregivers can use it to divert a patient who has an imaginary fear or who insists on doing something improbable, such as going home.

“Instead of arguing with them, you step into their world just like an improv scene,” Baum explains. “You say, ‘yes,’ and add information to it and redirect them.”

She personally uses these methods with her father, who has long suffered from a brain injury and dementia. Before studying improv, Baum frequently corrected and reality-checked him, which only worsened his behavior.

“When I discovered that you could learn the process of improv and use these techniques to communicate with your loved one, it was life-changing,” Baum says. “Our relationship went from being very stressful and frustrating to much more joyous interactions. We were more playful. The day was so much easier for both of us.”

Baum met Goldapp while taking an improv class in which Goldapp was performing. They researched using comedy skills in caregiving and discovered that it was a growing field.

Stomping Ground Comedy Theater is a nonprofit organization that typically offers these workshops at its Design District headquarters and other facilities. It also presented a workshop at the Global Alzheimer’s Platform Foundation national conference last February.

Because the facility is closed because of the coronavirus pandemic, Goldapp and Baum are designing online Improv for Caregivers classes that will begin this summer, thanks to funding from AWARE, a local Alzheimer’s nonprofit. The program will be low-cost or free, Baum says.

Many of the concepts, such as speaking mindfully and validating another person’s feelings, can also be applied in daily life and parenting.

“There is a lot we can learn about being flexible, being adaptable, stepping into their world and agreeing with them and understanding their reality,” Baum says.

To learn more and register for upcoming classes, visit stompinggroundcomedy.org.